We see a slightly tarnished halo.

Deregulation has meant no real increase in electricity rates for homeowners and lower power costs for small and medium businesses. 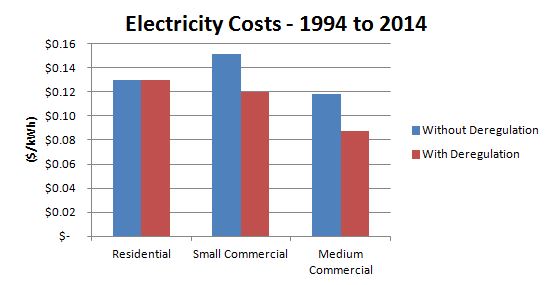 Recently, utility deregulation in the Alberta market has been receiving negative press, but the data shows deregulation is not to blame for high electricity costs. When looking at rate changes over the last two decades, Solution 105 has determined that deregulation has actually reduced electricity costs, with many smaller customers getting substantial savings.

As an example, a residential bill from 1994 compared to today actually shows a small cost reduction since deregulation. Note that bills are adjusted for the Consumer Price Index for Alberta and include all charges.

A small or medium commercial customer, like a convenience store or a small retail clothing shop for example, has benefited significantly from deregulation, with savings of 21 to 26 percent! Regulated rates are the biggest culprit we’ve identified as responsible for the incredible cost pressures in the electricity industry, especially the over-built transmission system that’s being put into place.

For an example of what regulated rates have done: a typical office tower in Edmonton paid less than 2 cents/kWh for delivery and other regulated rates in 2002 but by 2013, regulated costs had tripled!

The graph below shows the how the overall regulated charge has grown since 2002.

If the province wants to ‘fix’ anything about the electricity situation in the province they should fix the distribution and transmission companies and their rates which have clearly gotten out of hand. One method would be for the province to mandate Performance Based Rates, or PBR.